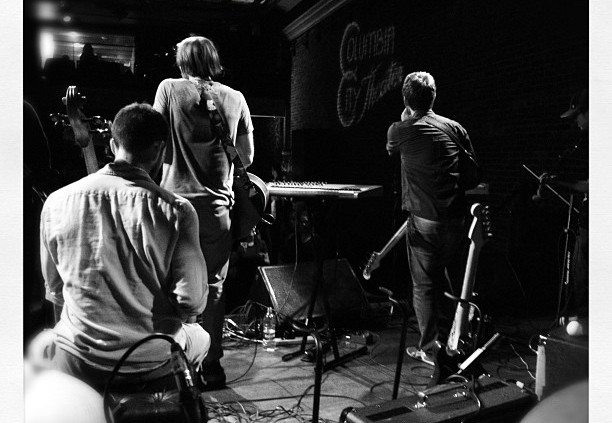 Eight months ago I joined a band in Seattle, Pocket Panda. I’ve played music most of my life and in all sorts of groups, but this was my first experience in a “rock band”. It has been a blast and has exposed me to a new and exciting scene in Seattle.

In terms of musical background, I’m very much classically trained. I’ve played cello since I was about eight, took a couple years of piano lessons, and picked up trombone in middle and high school for concert and jazz bands. In high school, I also started fooling around with guitar, mostly struggling to play Pink Floyd and Dave Matthews covers. I got a lot more serious about guitar a few years ago when I got into country blues. I never practiced my voice, but I’ve been getting more involved with that lately. When I went traveling abroad, I brought a ukulele and fell for that as well. I’ve played in orchestras, string ensembles, musicals, and as my focus shifted to guitar, by myself or with a friend. But never in a band, never in a self-directed group with the purpose of creating original music to perform regularly.

One night after practicing some Bach Cello Suites, I put on a Shostakovich trio I hadn’t listen to for a while. At the time, I was playing in a casual string quartet, mostly Mozart-era repertoire. The Shostakovich reminded me of some of the fantastic small-ensemble pieces I had played in high school (when I was the most serious about cello), and I decided to scan Craigslist for a couple folks who might be interested in a serious endeavor like that. The result: no string ensembles. A couple people offering cello lessons. An amateur orchestra with open auditions. And one “indie-rock band with folk tendencies” looking to augment their string section.

I listened to the only song they had posted on their website, and I liked the sound a lot. I was feeling reckless with the boundaries of my comfort zone, so I decided to send an email. I met up with the lead singer, went to a couple trial practices, and learned a couple of their songs. Within about a month I was part of the band.

And it has been a blast. The newness of the experience has been terrific; my comfort zone has undoubtedly expanded. I’m constantly learning about how the music scene in Seattle works and what it takes to put this kind of group together. I’ve gotten comfortable with playing shows – at least as the cellist. The idea of singing still freaks me out, but I’m getting more comfortable with it. And the cliche about a band being like a relationship – well, it’s completely true.

Here’s how it works. We rent a practice space in a grungy part of town for a couple hundred bucks a month. It usually suits our needs perfectly – enough room for the seven of us – but it can get noisy when other bands choose the same practice times as us. We practice twice a week for a few hours each time, and we occasionally have smaller meet-ups to work on specific parts and harmonies. The lead singer writes the lyrics and structure for most of our songs and we use our practice time to hash out the direction and details of the rest of the parts. At the moment we’ve got about a full record’s worth of original music, all of which we’ve performed, but most of which we haven’t had the time or funds to record.

Playing shows has been the biggest step out of my comfort zone, and also the most rewarding. I remember feeling some nervousness performing when I was younger, especially when my part was exposed or when I didn’t feel totally solid with the music. I haven’t felt even a hint of nerves thus far playing with the band. Partly this is due to the circumstance – I am sitting, which decreases my exposure, and my parts are not all that technically difficult. I am also confident with the cello. It is second nature to be playing it in front of people. Vocals are a different story. Even just thinking about singing into a microphone makes my palms clammy. I also can’t play cello and sing at the same time yet. Both things I’m actively working on.

And so shows are a joy to play. Every one has been fun, even when the audience is small or distracted. There is a feeling of energy on stage happening in the space between us, a spark that doesn’t happen during practice. We know our songs well, and this is our opportunity to send our energy and emotion out into the crowd. When we play at bars we usually get a couple free drink tickets a piece, which is sometimes the biggest part of our payment. At slightly larger venues, we usually split the cover with the other bands playing and the bar, and can take home a couple hundreds bucks or more on a decent night. Not enough to make any money, but enough to help with practice space rent and recording. A few of our shows have had great backstage setups – couches, coolers of beer, free food. It’s fun to feel like a VIP for the night.

Another piece that has made these shows so enjoyable is the immense support I’ve gotten from my friends in town. I’m lucky to be part of such a good group of people. They come out to shows and do fun things like cheer my name between songs (“Why is everyone cheering for to cellist??”). It makes the events feel intimate and comfortable. A real joy.

Because we spend so much time together as a group, and because we’re exploring something that each of us feels passionately about, being in the band can feel like being in a relationship. A few months ago our drummer got upset with the rest of us and quit the band (he has been replaced, and our new drummer is stellar). This experience was the most similar to breaking up with a romantic partner that I’ve had. Harsh words were shared. We had to coordinate his moving his stuff out of our space. A lot of eye contact was avoided. Emotionally wrought emails were exchanged throughout the process. Luckily there were still six of us to keep the relationship going. We were able to move on, and we found someone great to take his place. And for now, we all get along well. We still have differences of opinion, but for the most part we’re able to communicate about them and find some middle ground. Good communication – a universal necessity for successful relationships.

I’m excited now to see how we grow as a band. We recently got together with a manager. We’ll be putting together a KickStarter or IndieGoGo campaign soon so we can (if it succeeds!) afford to record a full-length album. We’re pushing for bigger shows and more radio play. Things are moving in fun directions, and people seem to like what we’re making. I’ll keep you posted!

Have questions about what it’s like to be in a band? Post a comment and I’ll try to address it next time I write about it. To listen to Pocket Panda, check out our Bandcamp page. If you like what we’re doing, you can stay updated on Facebook and Twitter. Enjoy!