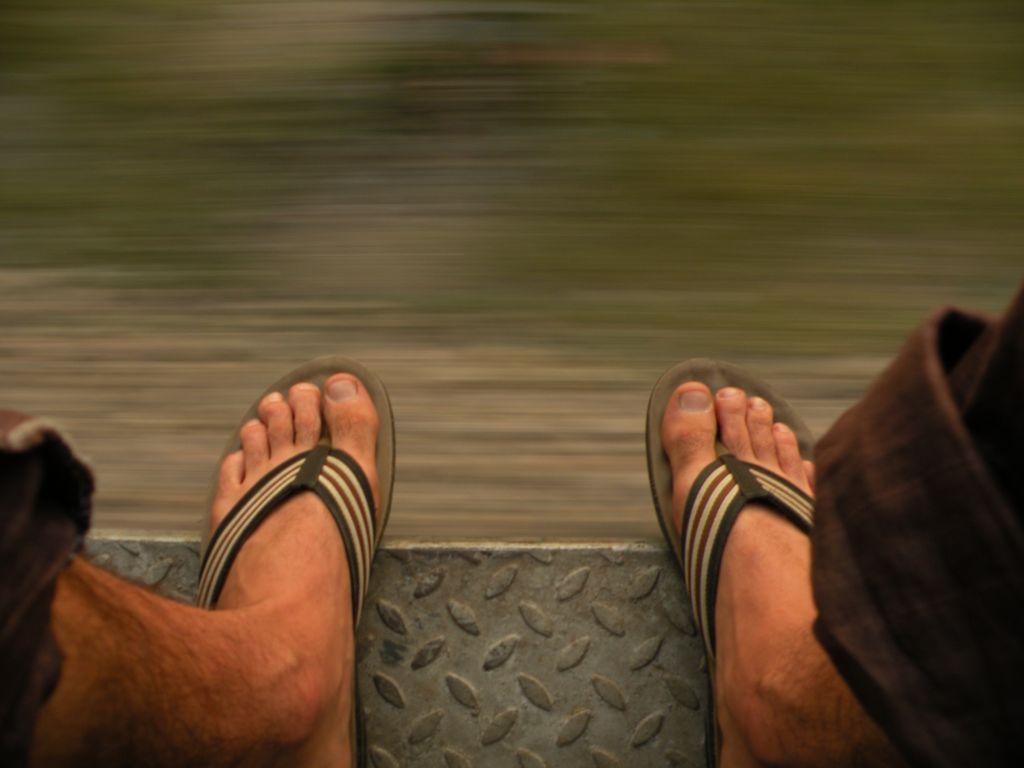 I recently discovered that the road to the place I love is, in fact, not a road at all. It’s a pair of iron beams, running parallel in perfect unison for miles and miles and hundreds of miles more. And when I say perfect unison, I mean close but with all sorts of bumps and divots, because this ride is not exactly “smooth.” But in India, the train is by far the cheapest and best way to get from Point A to Point B.

This time Point A is a bustling city in the South Indian region of Tamil Nadu: Chennai, formerly known as Madras. Point A is also a place of seeking, of curiosity, of wondering what the world has in store for me, of imagining all the strange creatures that could be living in my water, or worse, already in my stomach. Point A is an American who thinks he loves yoga, but isn’t sure what’s up with all the dots and lines on peoples’ foreheads.

Point B is harder to define. You could call it New Delhi, or probably Rishikesh shortly thereafter, but it would be more accurate to just label it as “Unknown.” I have some ideas of what Point B might look like, but train rides in India have taught me that Point B is never what you expect. It’s better not to speculate, but of course I can’t resist. Point B is a spiritual place, one with a deep understanding of yoga, of the self (if there is such a thing), of meditation, the mind, humanity. At Point B, I am not going to get sick. There will be naan.

The route from Chennai to Delhi is 2,200 km, but because this is a “Super Fast Express” train, takes a mere 34 hours instead of the 50-60 it would take on the regular “Express” train. For those who haven’t visited the subcontinent, here’s a quick primer on seating classes for Indian trains:

Second Class: Bench seats are completely unreserved and they let as many people on as want to go. This can be chaos and is strongly NOT recommended for trips longer than an hour or two.

Sleeper Class: Each six-foot section of the train is broken into eight bunks. Three tiers on each side of the main compartment, two tiers on the opposite side of the walkway, slightly shorter in length.

2A/C: Same as 3A/C, with two bunks per side rather than three.

1A/C, EC, CC, Beyond: Various nicer methods of travel which I haven’t explored, some in seats rather than benches, and possibly some in which you practically have a whole cabin to yourself.

Based on a few other medium-length (5-16 hours) train rides I’ve had here, I decided that for the long one I would splurge for the additional comfort of 3A/C. April in India is hot, and although I haven’t seen an actual thermometer in months, I’d say the average temperature has been getting well into the 90’s.

Fate (and my propensity for last-minute planning), however, plays a large role in these decisions, and by the time I booked only Sleeper class was available. No problem, at least it’s cheaper. And by cheaper, I mean dirt cheap. We’re talking $11 for a 34-hour, 2200 km ride. Hence my lack of guilt at the idea of “splurging” for the 3A/C ticket, which would have been about $20.

I should add that I’m traveling with a small statue of the Indian god Ganesha in my bag. It is important to have some divine intervention here. He’s the one with the elephant head, famous for his ability to remove obstacles. So he basically hooks me up on this one: my overnight bus to Chennai drops me directly at the train station two hours before my scheduled departure, leaving me plenty of time for a leisurely breakfast of puri (puffy fried dough) with the typical sides of potato and coconut curries.

The train is not especially late – the rail system is the largest employer in India, and one of the most organized and reliable institutions in the country. Sleeper class is as expected, but the car is older than most I’ve been on: the power is spotty, the paint job flaked, the dirt slightly more caked than on the newer cars. There are bars on the windows, which from photos my mom thinks makes the car look like a prison. But it means the windows open all the way, letting in plenty of fresh, fast-moving air to combat the heat. (Except that fresh air in India is usually hazy with smoke from fires in the fields, and more commonly, piles of burning trash and plastic. This is a whole other story, but basically it’s a huge bummer.)

I get comfortable and immediately take a nap in my upper berth to recover from the poor night sleep I got on the overnight bus. I came prepared for this journey: fully-charged iPod, a journal with plenty of ideas to hash out, War and Peace. Somehow I always end up reading epic Russian novels in tropical places. The train car is hot and the seats are the kind of fake-leather-polyester that gets sticky and releases layers of stored dirt when you sweat on it. Despite my smiles and brief exchanges in halted English/sign language, my compartment-mates seem firmly bent on strewing their belongings far and wide across the benches. This feels like a subtle claiming of territory, a gentle push-back against the white privilege they know I experience throughout the country. I have no way to test this theory. It doesn’t matter – yoga has opened my hips and legs in the last few months. I can squeeze into small spaces for long periods of time.

The trip continues: six, ten, fourteen hours. A decent night sleep, twenty-four, thirty hours. The situation doesn’t exactly get more comfortable. But I start to realize something. Despite whatever difficulties or confusions arise, I still feel calm, relaxed. I’ve adjusted to the discomforts to the point that they don’t feel like discomforts. I am being here with myself, smiling. Occasionally I’ll engage in brief conversation with a curious Indian. At one point a young guy sees I have a ukulele and pulls down his tabla from the upper berth. We jam out for a half-hour and draw a crowd from the surrounding compartments. Even with the layer of grime that has slowly coated my travel clothes and exposed body parts, this trip is really cool. Life is good.

And then it hits me. I’ve been telling myself that yoga, Rishikesh, some vague Point B, is my destination. But I’m doing yoga right here. I am where I am, right now. This is what yoga is all about. I’m exploring the present moment, sitting with discomfort without letting my mind go down the drain. That’s straight from the Yoga Sutras. I’m doing Train Yoga. I would market this back in the States, if only we had a functional rail system.

This trip will give me an opportunity to practice all sorts of more “traditional” forms of yoga, ones with asanas and pranayama and downward-facing dog and (I hope) happy-baby pose, but for now I am glad to be able to sit on a train and just be. To feel the wind on my face, to watch the corn and wheat and cotton fields pass by, to sit comfortably, to breathe. They say India will change you. I’d have to say they’re right.

Can you run a marathon without training?