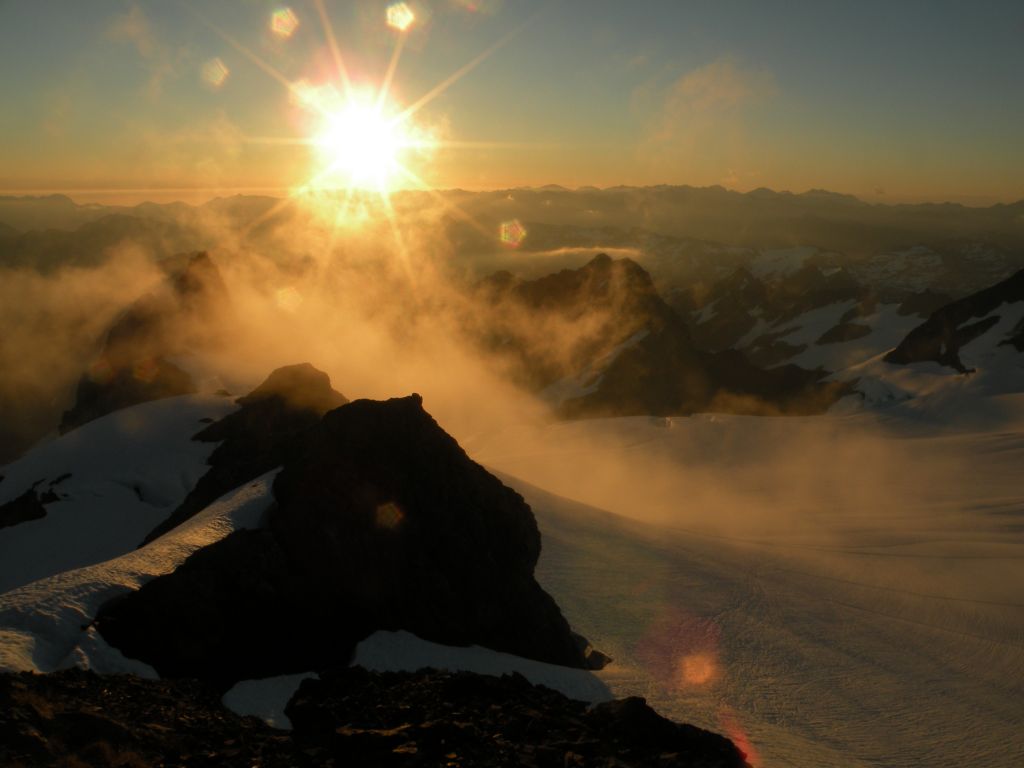 I just spent an extended weekend doing one of those things I don’t tell Mom about until after – this time summiting Mt. Olympus. It’s not an extraordinarily tall peak, but the remoteness and climate of the Olympic National Park make it quite an adventure. I climbed with my friend Adina Scott, who recently finished up a super rad trip on Denali that you might have heard about and should definitely check out.

The basics: The summit of Olympus is 7,980 ft, but it’s pretty much impossible to see from anywhere populated because it’s so deep in the Olympic National Park. The standard route (which we took) is through 18 miles of rain forest along the Hoh River on the west side of the park, then over various glaciers and snow fields to reach the rocky ridge that leads to the final summit block. The trip can be done in about 3 days (4 is more typical), or a bit less if you’re traveling light and fast. We decided to take 5 days and explore the glaciers a bit more once we were up there. Here’s how it happened.

Friday. Packing, checking gear, sorting out food. Got to bed around midnight. In retrospect, probably should have aimed for a few more hours of sleep here.

Saturday. 5:15 AM wake-up to catch the first ferry to Bainbridge Island. Drove 5 more hours (with a quick stop at the Wilderness Information Center to pick up bear bins) to the Hoh River Trailhead. Quick lunch and bag organization, on the trail by noon-thirty. We hiked 17.5 miles and 3,500 feet elevation to get to our first camp site, Glacier Meadows, which is where the maintained trail ends. The rain forest is beautiful (and yes, there is an official rain forest in Washington). This hike was somewhat devastating toward the end, as our packs were heavy with 5 days of supplies and lots of mountain and camping gear (ice axes, crampons, gaiters, pickets, ice screws, harnesses, rope, 4-season tent, sleeping bags and pads, cookware). We got to camp around 9, made some dinner and got to bed around 10:30 PM. Long day. 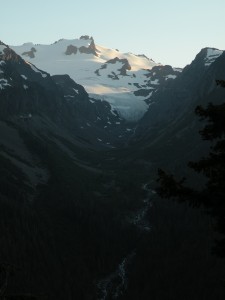 Our first view up the valley to the glaciers above.

Sunday. We were hoping to get a nice early alpine start (like, by 4 AM), but Saturday took too much out of us, so we accidentally slept til 6. We packed up camp and made breakfast, hit the trail by 7:30 or 8. Most people leave the their camping gear at Glacier Meadows and only take what they need for the summit at this point, but because we were planning to stay on the glacier for a few days, we had to pack everything. The heavy packs definitely slowed us down, and it was a relief to start wearing a lot of our gear rather than carrying it on our backs once we got on the glacier. The first glacier, Blue Glacier, was all blue ice near the toe, which means there is no snow and all the crevasses are exposed. It sounds scary, but it’s actually safer because the dangers are obvious. Also, it’s really cool because you can see what’s happening inside the glacier and hear the water rushing beneath it and echoing up. 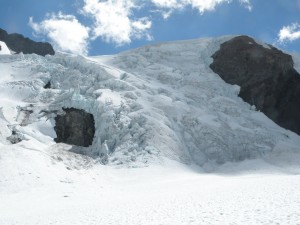 Once we crossed the first glacier, we decided to cache our bear bins and most of our food to lighten our packs. We took a few bars and snacks with us for the summit, and our condensed bags were a blessing on the steep terrain to come. We headed up over Snow Dome and continued on toward the summit. It was midday by now, but the glaciers were very mellow and the snow conditions were great. We plodded along toward the summit, continuing up another 4,000 feet from our morning camp. By about 4 PM we made it to the false summit, had a snack, ditched our bags, and got ready for the final summit block. The rock in the Olympics is very flaky and fragile, so this final summit was definitely the sketchiest part of the trip. We ended up taking the route that is considered “fourth class”, but it’s really more like fourth class with a couple moves of 5.6, and unprotectable. We made it up fine, though, and got to the top around 6 in time to enjoy some beautiful views. 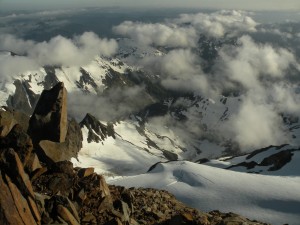 It would have been a quick trip back down to our cached gear, but we decided it would be worth skipping dinner to be able to stay at the summit for the night. Sunset, stars, sunrise. Unreal. Or maybe more real than anything else. It’s hard to tell at this point. 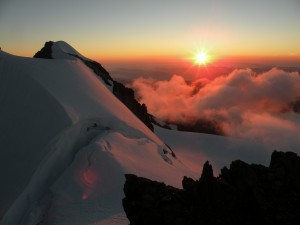 Sunset over the summit 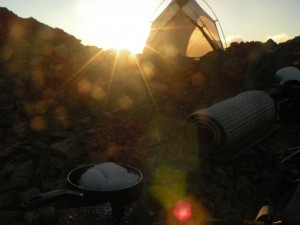 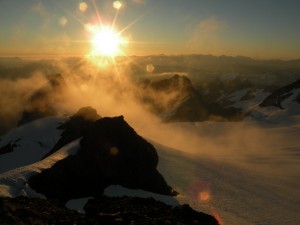 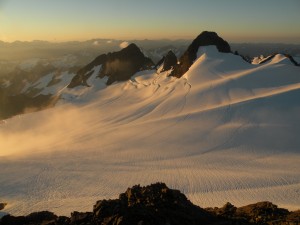 Monday. Early on, we had considered tacking on a traverse of the Bailey Range to the trip following the summit, but it was clear by this point that we weren’t going to be able to do the 5-day traverse in the 3 days we had left, especially with the little snow that was still clinging to the slopes. So we took things relatively easy from here. We departed the summit and swung by a maintenance building/weather station we had noticed perched on an outcropping on the way up. We were expecting it to be abandoned, but there was a guy there, Dave, who put out lawn chairs for us and gave us Kool-Aid while we traded stories. He’s been up there every summer for the past 40 years, doing various types of maintenance and research, including cleaning the mountain of gear and trash that was left there in the 1950’s. Super friendly guy, a personification of love for the mountain and the whole national park.

After our surreal refreshments, we skidded the rest of the way down to our cache and made a much needed and delayed pot of spaghetti. I had a quick accidental nap and we packed up and headed over to Glacier Pass, which separates the Blue Glacier from the Hoh Glacier. It was only about 3 PM, so we decided to cross the Hoh Glacier and head up to Camp Pan for a night. After a bit of a tricky rock scramble, we made it up to the camp to discover a beautiful oasis of tiny trees and huge vistas. A thing that was starting to make more sense to me at this point was the idea of “mountain time.” I’m pretty familiar with “forest time”, which is already totally different than time in civilization. Forest time is measured by rushing rivers and trickling creeks, by bird calls and berry plants and the occasional wildlife sighting. Mountain time is slower, almost stopped. Here almost nothing moves, and when it does it is a big deal. Ice falls and landslides and rarely any life. We saw a falcon and watched it for ten minutes as it weaved in and out of cliff banks. Time is measured by the slow progress of the sun across the sky, the gradual shortening and lengthening of shadows. There are waterfalls rushing on the cliffs surrounding, but they look like still white lines. It does strange and wonderful things to the brain. 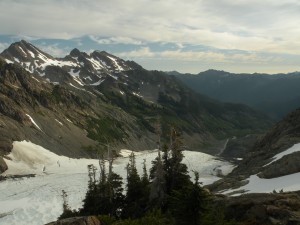 Tuesday. We had a leisurely morning at Camp Pan and decided to grab some day packs and take a peek at the next valley over Blizzard Pass. The vastness of this place is so striking. We had already been able to see into most of the valleys from the summit, but actually walking there made the proportions a bit more real. We looked over the Humes Glacier down to Queets Basin and the headwaters of the Queets River. Blizzard Peak had just about the most evil rock I’ve ever met, an unhappy combination of sharp and crumbly. 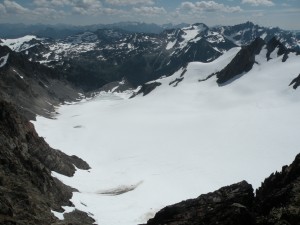 Humes Glacier down to Queets Basin

We soaked in the views for a bit, then headed back to pack up camp and start our trek back out of the park. We crossed the Hoh Glacier up to Glacier Pass, scooted down the Blue Glacier all the way down to the blue ice, headed up the lateral moraine, and found ourselves back on a trail by about 6 PM. We continued another 6 miles through the forest to a camp surrounded by life and blueberries and comfortably thick air. Dinner by about 10, and straight to bed. 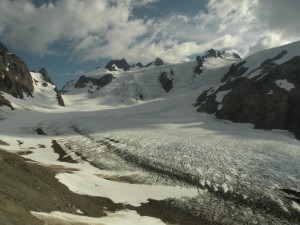 Blue Glacier on our way back to the forest, summit in the distance

Wednesday. All we had left was to walk out the downhill and flat section of the rain forest, about 13 miles. We got moving at a decent hour, and again, the rain forest was beautiful. My ankles started to hurt from all the downhill on hard terrain, but the rest of my body felt great. Our packs were a little bit lighter from all the food we had eaten, and our legs were stronger from all the walking. We got to the car around 2 PM, ate lunch, exploded and sorted all our gear, and hit the road. We bought milkshakes, which were wonderful. The drive was just as long as before, and we rolled into Seattle around 9 PM. Tired and happy. Pretty epic adventure. 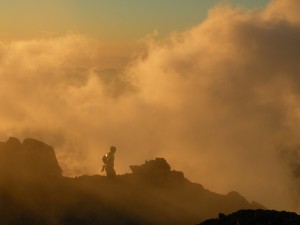 Adina at our false summit camp

Taking the Plunge: It keeps getting better