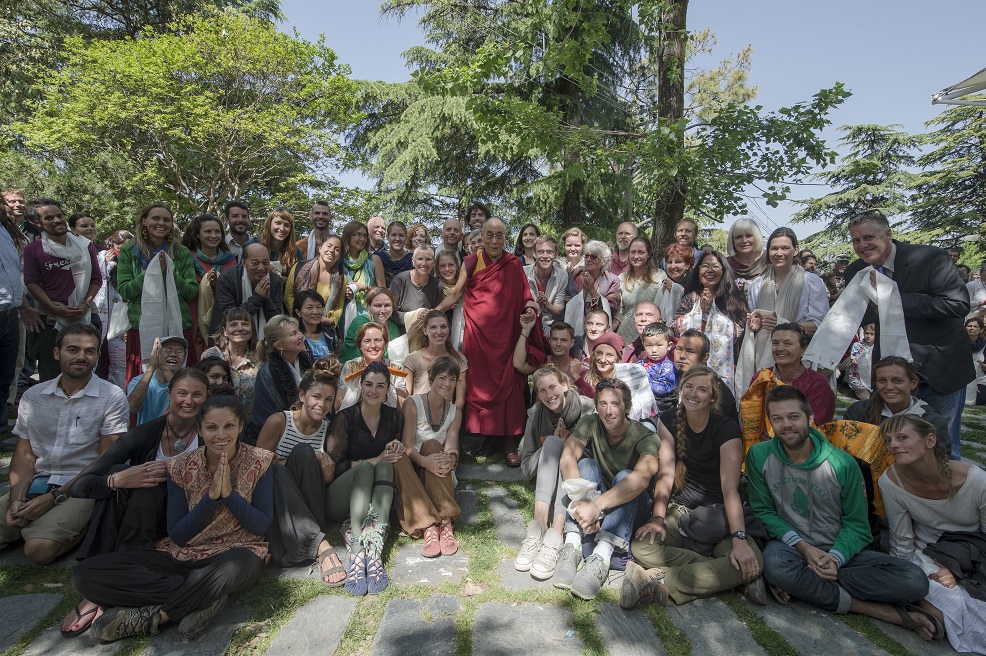 I’ve been staying in Mcleod Ganj for two weeks now, the home of the TIbetan government in exile and the Dalai Lama. It’s just up the hill from Dharamsala in the Himachal Pradesh region of northern India. Like most places I’ve been in India, this place is completely different from every other place I’ve been in India. Only the difference is more extreme. The Tibetan community and culture changes the vibe completely. There are also a lot of westerners here, but they tend to be socially-conscious volunteering types rather than travelers looking for the cheapest bed. It’s just about the calmest, cleanest, most
coffee-filled city I’ve visited in India.

I’ve been into Buddhism since I was a teenager, so part of my idea coming here was the hope that I’d get to see the His Holiness the 14th Dalai Lama. Based on his official website (he also has Twitter), it seemed like he might be in town for a few days between trips to Japan and Norway, but that he wouldn’t be holding any public audiences. Then last week while returning from a hike, a man recognized our new friend and Pacific Northwest yoga teacher, Paul, and stopped us. This guy had done an acroyoga workshop with Paul four years ago in Mysore. Who knows how he recognized him, but he told us that the Dalai Lama would be holding a receiving line for foreigners on Saturday, and that you had to register at the Tibetan security office. We booked it down the hill to the office, got there 45 minutes after they were supposed to close but just as they were getting ready to actually close. It turns out we would have been able to register the next day as well, but registering that afternoon saved us a multiple-hour wait in the line.

Saturday came and it turned out about four times as many people as they expected had registered for the event (1600 foreigners and 400 Indians – I could have told them this would be popular), so the Dalai Lama would be standing with small groups for photos and giving a talk instead of receiving everyone individually. This rarely happens for westerners, so we basically got super lucky to have this opportunity while already in town. We arrived around 6:30 AM, slowly got shuffled into the courtyard in his residence, and stood around for a few hours. Eventually we were instructed to organize by country and break up into groups of 40-50.

Sometime after 10 AM, His Holiness appeared from his residence, grinning and wearing those awesome tinted glasses he wears in all his photos. I’ve heard people talk about how the energy in the room changes when certain great people are around. I had some feeling of this when visiting Amma’s ashram, but it was not as tangible as this. When the Dalai Lama appeared, everyone immediately buoyed up out of the haze of hours of waiting around. I could feel a sensation of opening in my heart, and a huge smile immediately formed on my face. Part of this is due to expectation being satisfied. A bigger part, I think, is the collective energy of the group. And a third part, which I can’t explain but may be the real reason, is the energy and aura of the person. I don’t know what to think about auras, but you can tell when someone has good energy, and this guy has great energy. Supposedly you could feel the Buddha’s aura from three kilometers away.

As the Dalai Lama walked from group to group, every movement seemed to be filled with joy and kindness. He joked around naturally with everyone, received their greetings with grace, and transmitted an amazing sense of compassion. It was all a little bit rushed because of the size of the group, but he took the time to connect with people who felt compelled to ask or tell him something. The photo itself wasn’t such a big deal. It was a lot more fun to watch this 78 year old man navigate a crowd of 2,000 adoring fans. 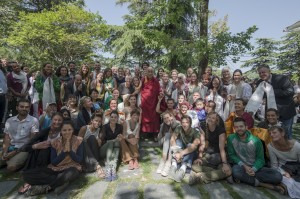 After all the photos were taken, the Dalai Lama made his way to the stage to give his talk. It was great to hear his voice, and his laugh is unbeatable. I took two main points away from the talk, though the whole thing was powerful. First, that all the struggles created between groups of people are based on secondary (or tertiary, or lower) characteristics. Skin color, religion, ethnicity, nationality, economic status, politics. All are secondary to the fact of our common humanity. It can be so difficult to see beyond these apparent differences, but the fact is that each of us is one of seven billion people on this planet. We’re all striving for pretty much the same thing: a happy, secure life. He also gave a shout out to India for being the largest democracy in the world, and for having such a strong cultural attitude of nonviolence and tolerance. There are always exceptions, but it is remarkable how many different kinds of people live so densely here, yet in such peace.

My second major take-away was on the secular education of compassion. Formal education systems around the world focus on facts and analytic thinking in the maths and sciences, and leave ideas of kindness and compassion to religious and community organizations. It turns out compassion is not religion, and there’s no need for it to be confined to a segment of life with so much other baggage, and which is absent from so many people’s lives. Cultivating compassion is crucial for living a joyful and happy life, even for atheists. The more I read about neuroscience, the more I understand that this is a quality of the human brain, and has nothing to do with God or saints or what-have-you. It’s science. “If you want others to be happy, practice compassion. If you want to be happy, practice compassion” – HHTDL. I have a lot more thinking to do about this, but I’m pretty sure I want to make it a big part of my life.

The main piece I’ve left out of this story of meeting the Dalai Lama is plight of the Tibetan people, and the fact that all of this joy and kindness comes from one of the most persecuted and repressed populations in the world today. I’ve been finding out much more about the issue since I’ve been in town, and I hope I can relate some sense of what’s happening in my next post. To be continued…

Iyengar Yoga/I am not a Yogi

What is Happening to Tibet?
Scroll to top