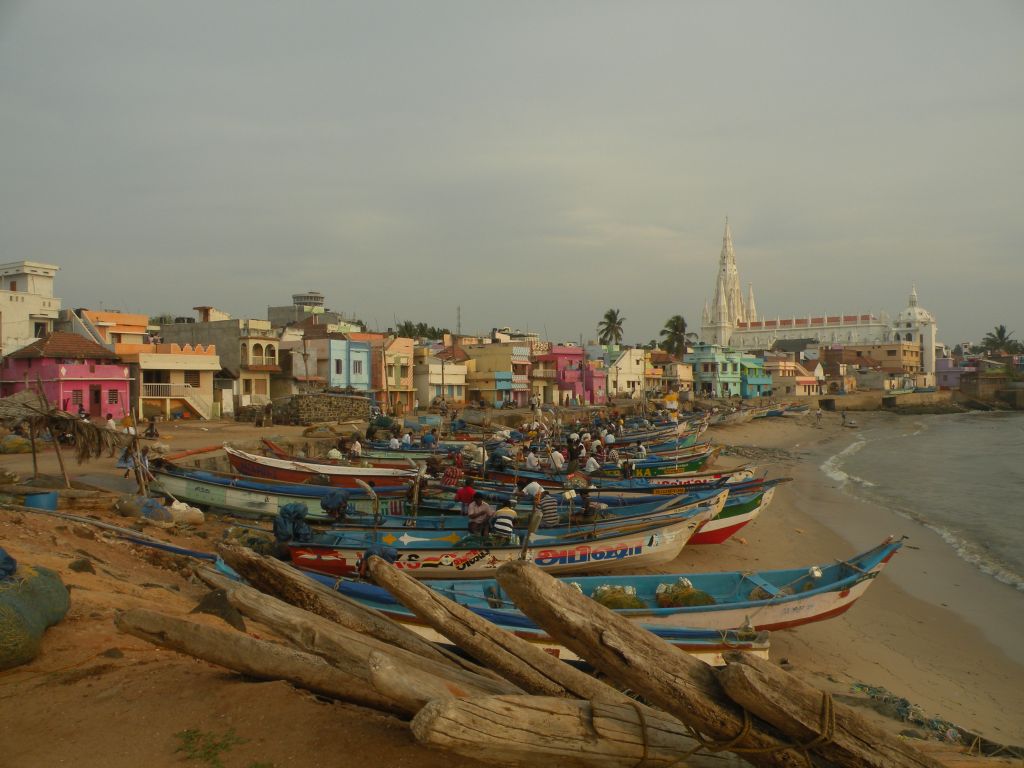 From Verkala we decided to take a few-day excursion up to Amma’s ashram, the home of the famous hugging saint. I hadn’t heard of Amma before arriving in India, but some people were talking about her during the yoga teacher training. She is said to be fully enlightened, and communicates her love and wisdom by hugging. She’s given over 30 million hugs so far around the world. The organization which has grown up around her in the last couple decades also does great humanitarian work throughout India and around the world. We were planning to stay two days, ended up staying five, and could have stayed much longer if other experiences weren’t calling out so loudly.

Even after five days there, I still don’t know what to think of the Amma experience, or even where to start relating it. Partly it felt like a cult, partly a relaxed and friendly ashram, and partly like the real thing: tutelage under an enlightened guru. There is powerful energy there, and it seems to be stronger the more you’re willing to surrender to the experience and to Amma herself. Her hugs are very good. It feels a little like Jesus Camp for people who have been turned off by Christianity. The place sets off all sorts of warning bells for me, but something about it felt completely true and authentic.

Part of my intrigue with the place relates to thinking I’ve done and conversations I’ve had recently about the heart. Specifically about opening the heart and living vulnerably, rather than living from the head. I’ve found that I approach life very rationally, and look at almost all difficulties from a logical perspective. Often I view creative problems from a rational, head-derived perspective, even though those aren’t head-problems. Even my yoga often comes from a place of speculation and over-thinking, rather than one of feeling and emotion. All that said, I’ve created quite a good story of heart-work going on in my life, and I’ve learned to project that that is what’s going on, even when it’s not. Sometimes I really do feel that my heart is leading the way, but not often enough. Too often I use my intellect to know how I should respond, and do that rather than acting from the heart.

I’m not sure this makes much sense from an outside perspective. The basic idea though, is that everything I do will be that much more meaningful if it truly comes from my heart, not through a veil or facade I’ve built up over years of analytic thinking. My yoga, my art, my music, my relationships. So it’s a big thing to work on, and I feel like being at Amma’s gave me a good environment to get focused on it, to practice opening up. Even just being on stage with her while she’s giving hugs (which she does about 10 hours a day), I could feel an energy creating pressure in my chest, perhaps peeling away some kind of sheath around the heart. The more I was willing to accept this experience, the stronger it would become. By the end of the stay, I felt much more open than when I arrived. There’s no way for me to know if this kind of energy is real or imagined, but at a certain point it doesn’t matter. It heals and helps, and that’s what counts.

One piece I thought about a lot during the stay was the balance of feminine and masculine energy in the heart. A lot of advice about the heart is based around learning to love oneself. I think this is crucially important, but I have never quite related to it because it comes somewhat naturally to me. Maybe this is the masculine approach to the heart; it’s the baseline I’m starting from. The piece that I think is much harder for me to internalize is the other side, the place where women naturally come from – giving the heart away. I don’t want to draw too many broad generalizations here, but this has been more or less my experience. Naturally, women tend to nurture and give their energy away, men tend to protect and keep their energy close. To balance the heart, I think I need to practice more giving my heart away, surrendering, devoting my energy to someone else’s good work.

I have some ideas for doing this, mostly involving volunteer service. I’m hoping to serve a Vipassana meditation course when I’m up north next month, maybe volunteer with an organization in Dharamsala, and definitely get more connected with community groups once I land back in the states. Meanwhile, I’m trying to approach my stay in India with open eyes and an open heart. It can be hard, but it is totally worth it. I can already feel a change in my perspective, and in the way people interact with me. I think this is the biggest work for me to do on this trip.